Other people’s words on … wandering

Musing takes place in a kind of meadowlands of the imagination, a part of the imagination that has not yet been plowed, developed, or put to any immediately practical use. Environmentalists are always arguing that those butterflies, those grasslands, those watershed woodlands, have an utterly necessary function in the grand scheme of things, even if they don’t produce a market crop. The same is true of the meadowlands of imagination; time spent there is not work time, yet without that time the mind becomes sterile, dull, domesticated. The fight for free space — for wilderness and public space — must be accompanied by a fight for free time to spend wandering in that space. Otherwise the individual imagination will be bulldozed over for the chain-store outlets of consumer appetite, true-crime titillations, and celebrity crises.

from ‘Wanderlust‘
by Rebecca Solnit

Most of you would know by now that one of the greatest pleasures in my life is wandering: along the beach, through the Scrub. We read a great deal these days about the value of high-intensity exercise (the dreaded HIIT), and though I understand the principle — short bursts of intense exercise, in order to get your heart going — I find the practice intimidating and somewhat soulless. I’m not interested in exercising purely to become ‘fit’, or to ‘get healthy’, or to try to do something epic.

What I’m interested in is wellbeing — a concept that includes mental, emotional and spiritual aspects as well as the more obvious physical ones. 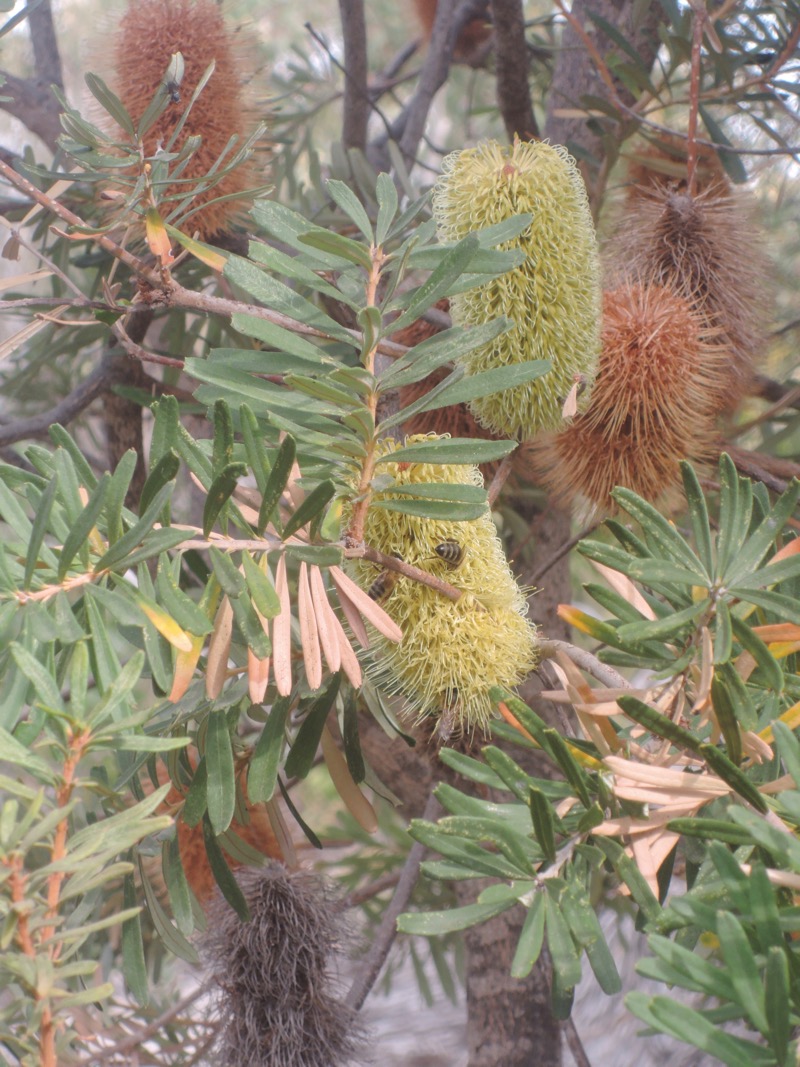 That’s why I like to wander. Wandering, for me, can be a slow stroll through the bush, or it can be a steady march along the shore. Hopping on my bike and riding places — that’s a form of wandering, too. It’s about breathing in fresh air, moving through beautiful surroundings, looking around, and — yes — musing. As Solnit points out, it’s about being unfettered in time as well as space. Musing takes place in a kind of meadowlands of the imagination, she says. 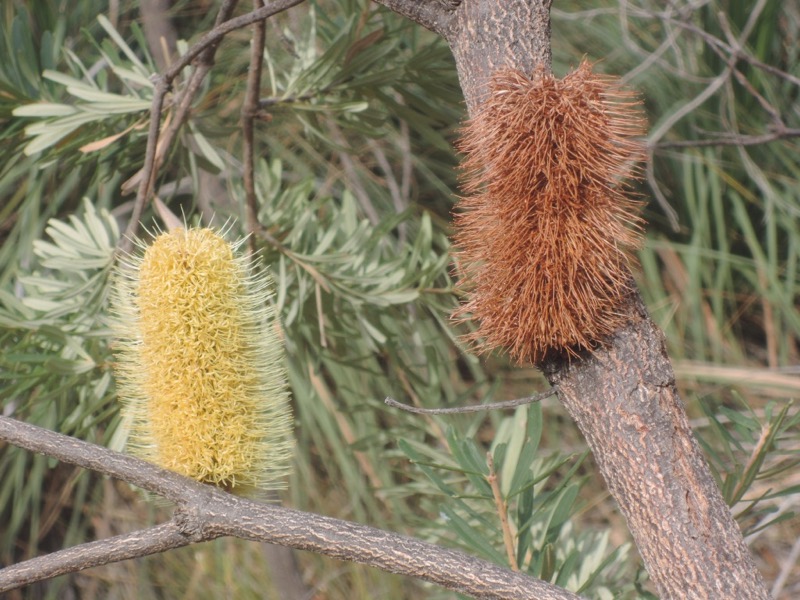 So today’s round-up of photos comes from another one of my recent wanders through the Scrub, back at the end of April. It was a dull, still day, and not many of the plants were in flower. The bush seemed stripped of bright colour: it was all earthy greens and sandy browns. The birdsong was muted, too — the whistlers don’t call much at this time of year; the shrike thrush songs are shorter and softer than in the warmer months. A crow croaked and muttered in the distance, and I heard snatches of broken magpie song. 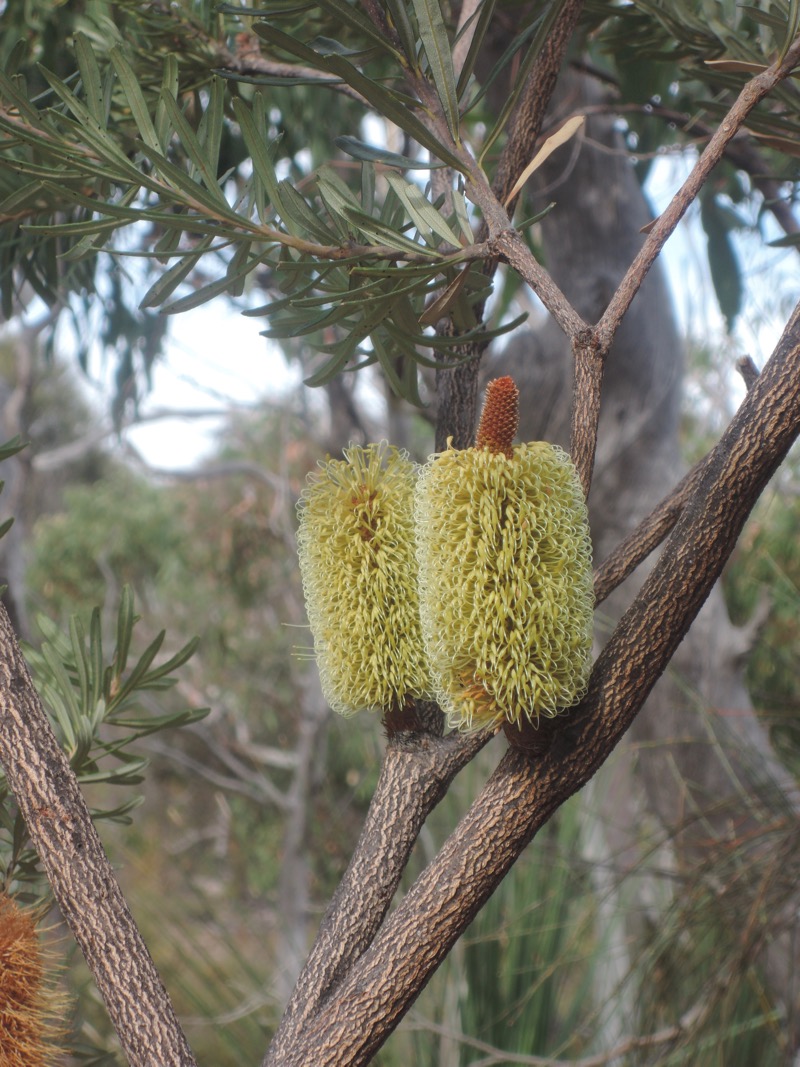 But then I noticed the banksia trees, which were all in flower. I hadn’t seen them at first because I’d stepped in from a louder, brighter world beyond the Scrub, a world of fences and bitumen streets and painted houses. Banksia leaves are a dark, khaki green, and the flowers blend in with the surrounding vegetation, varying in colour from pale yellow, through light green, to drab brown. Their beauty is as muted as the birdsong I described above, and in order not to miss it — in order to appreciate it — you have to be willing to slow down. To stop. To muse. 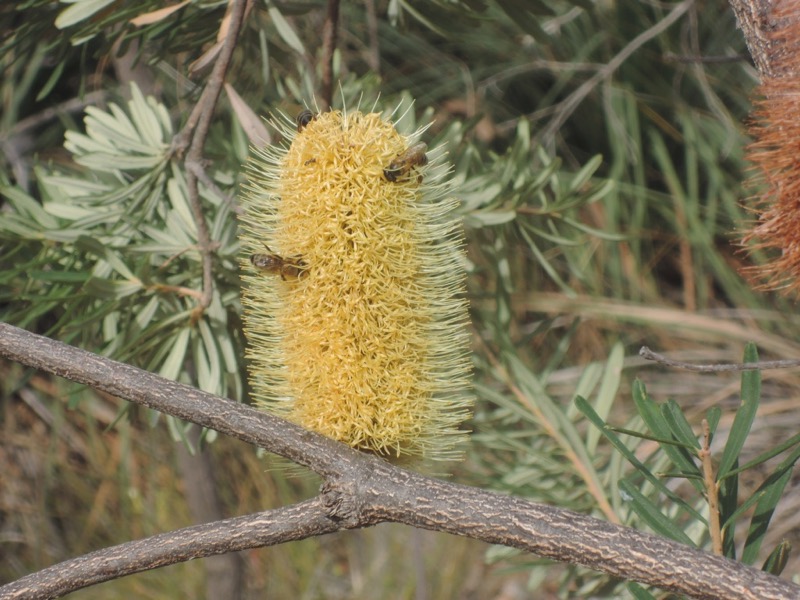 And that is what I did.